Australia and New Zealand have reached an agreement to establish a travel bubble between the two nations which will enable Kiwis to fly into New South Wales and Northern Territory from 16 October.

Announcing the decision, Deputy Prime Minister Michael McCormack said the arrangement will allow more Australians stranded abroad to return home, as it will free up an additional 325 places in hotel quarantine for returned travellers each week.

“Importantly, safe travel of New Zealanders to Australia will enable space in the quarantine system to be freed up for Australians returning, as I say, from other countries,” Mr McCormack said on Friday.

He added that if Queensland entered the bubble it would free up another 250 quarantine spots weekly for Australians to return from overseas.

“If Queensland were to agree to this definition, around an additional 250 quarantine places could be freed up allowing Australians from other world locations to arrive in Brisbane along with uncapped flights from New Zealand,” said the Deputy Prime Minister.

There are nearly 26,800 Australians who have registered their interest to return home with the Department of Foreign Affairs and Trade, which is nearly 8,000 more than the figure revealed in July.

But only 5,600 can be repatriated each week as per the limit set by the national cabinet to stem the spread of infections from overseas, of which Sydney is currently accepting 2,950 travellers.

‘Not enough for Australians stranded in India’

Australian citizen Koushik Ram whose wife and newborn son remain stranded in southern India said the additional 325 will not make a difference to nearly 10,000 Aussies stuck in India, a number which does not take into account a considerable number of temporary visa holders with inward travel exemptions. 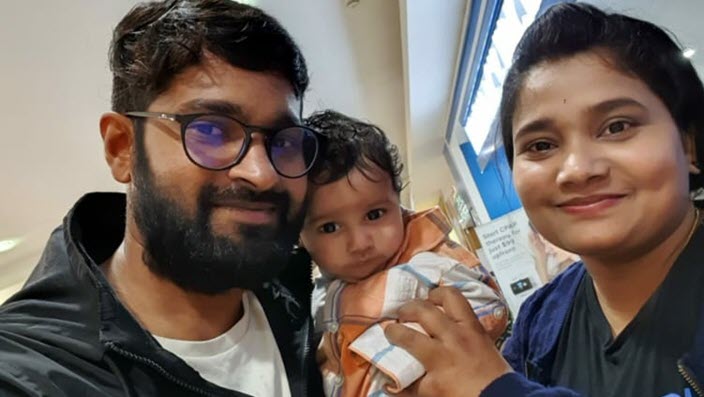 Koushik Ram with his wife Swapna and 10-months-old son.

“A majority of Australians trapped overseas are stranded in India which means thousands are scrambling for the limited seats on the Air India flights – their only option to make it home.

“If you spread it across the week, this would hardly increase the passenger limit by one or two in each flight which is like throwing a pebble in the ocean, it won’t’ make a difference,” he said.

India’s national carrier, Air India announced eight flights slated to operate between New Delhi and Sydney in the month of October, of which at least two were later cancelled.

Mr Ram said the government should instead send its own repatriation flights to vulnerable countries like India where a majority of its people are stranded, and the pandemic situation is rapidly escalating.

“Either get rid of the arrival cap or send your own Qantas flights to countries like India where most of the citizens and permanent residents are stuck and are anxiously waiting since March to return to their lives and loved ones,” said the 30-year-old.

People in Australia must stay at least 1.5 metres away from others. Check your state’s restrictions on gathering limits.

If you are experiencing cold or flu symptoms, stay home and arrange a test by calling your doctor or contact the Coronavirus Health Information Hotline on 1800 020 080.

News and information is available in 63 languages at sbs.com.au/coronavirus