Australian artist and photographer Guido van Helten’s photorealistic large-scale murals have graced structures from India to Tennessee, exploring topics such as water conservation, the changing of communities, and regional traditions such as farming, wine making, and weaving. For a new commission in Greenville, South Carolina, the artist created an impactful piece to commemorate the 50th anniversary of the desegregation of the city’s schools. “The concept behind this design is a culmination of 10 days of location research and community consultation—focusing on the broad theme of education in Greenville and the history, personalities, and legacies of the Integration Era—in order to find imagery symbolic of unity and diversity in modern-day Greenville,” says van Helten.

Over the course of his research trip, van Helten spoke with a diverse group of community leaders and refined the focus of the mural. “This approach opened up the concept to give voice to traditionally Black communities 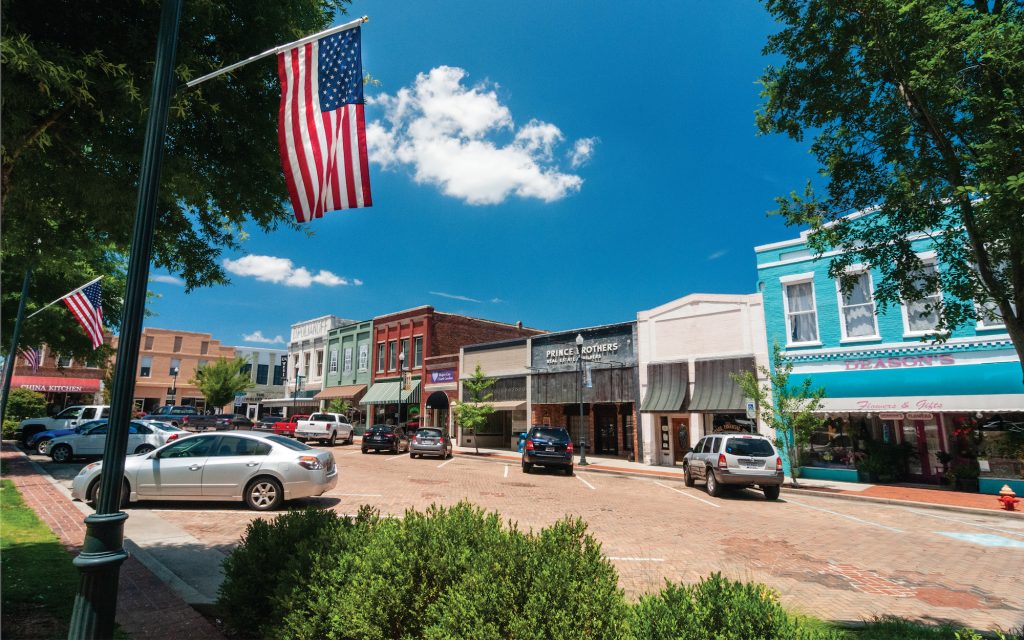 As the world slowly gets moving again, people are itching to get out of their homes for a weekend. Even if you aren’t yet ready for a huge excursion or a complicated travel plan, Abbeville, South Carolina may help satisfy that craving; it’s a small town with a big personality, plenty of charm, and undiscovered wonders. There are many reasons to visit, but we decided to just list off six:

Abbeville is located in South Carolina’s Old 96 District Tourism, which includes Abbeville, Edgefield, Greenwood, Laurens, and McCormick counties. The city of Abbeville rests halfway in between Atlanta, Georgia and Charlotte, North Carolina or about a two-and-a-half hour drive from either. It’s a bearable enough road trip for many, while still giving visitors plenty of time and energy left in the day after they arrive. No hassle with airports or day-long drives

Charles Wilford’s grandfather was not going to let him run the streets. And that’s how he learned to cook.

“You see, my grandfather had a tight grip on me and kept me inside with my grandmother, and I would sit in the kitchen and was amazed by how they would create meals for the family,” recalled Wilford, who in high school went on to work in one of Baton Rouge’s finest restaurants, Jake Staples’ The Place, under the tutelage of chef Amelia Griffin, known as Miss Maude.

“Miss Maude was one of the best in Louisiana,” Wilford said. “I would even put her in the same company as chef Leah Chase, of New Orleans.”

Following a stint in the Navy, Wilford found a new mentor at The Country Club of Louisiana where chef Sonny Creole “put me on the right track and the love for my craft today.”

Nestled in a residential section of Orangeburg, South Carolina, there’s a 3,500-square-foot structure that’s so minimalist, it looks at first glance like an elegant series of conjoined blocks.

It is actually a museum designed, built, and outfitted by photographer Cecil Williams. And while there are several sites in South Carolina on the U.S. Civil Rights Trail, this place is the only one commemorating the entirety of the civil rights movement in the state.

Among the hundreds of thousands of images that Williams has captured in his lifetime, the most popular is of a young African-American boy, dressed in a white shirt and suspenders, looking upward with bright eyes as he holds his mother’s hand at a rally in 1963.

Only a few feet away from where Williams has displayed that picture,

Auburn opened as a slight road favorite for next weekend’s game at South Carolina.

The Tigers, coming off a narrow escape against an upset-minded Arkansas, opened as three-point favorites against the Gamecocks, according to VegasInsider.com. The line quickly shifted to Auburn -2.5.

This weekend’s meeting will mark the first between the programs since 2014, as well as the first for Auburn against former defensive coordinator Will Muschamp, who spent the 2015 season on the Plains before leaving for the head coaching position at South Carolina.

Auburn leads the all-time series with South Carolina, 10-1-1, and has

COLUMBIA, S.C. (WSPA) – Something has to give this weekend as the 0-2 Gamecocks travel to Nashville to battle the winless Vanderbilt Commodores.

Despite putting together some solid drives against two ranked opponents, the Gamecocks still find themselves entering week three without a win. A late mishap against Tennessee, and a second-half collapse against Florida left them with a bad taste in their mouth. But a week three matchup with Vanderbilt brings a lot of optimism with it.

Collin Hill has played well through two games this season, and has engineered scoring drives on each of the team’s opening possessions this season. They’ve come out strong, but have failed to build on the momentum. After scoring on the first drive against Tennessee, the Gamecocks followed that up with five punts and an interception return for a touchdown to close out the half. After their opening drive against Florida,

I think Vegas is starting to catch up on this Auburn team.

After a two-point victory for the Tigers in which they were 14-point favorites  against the Razorbacks, early lines from Sin City have Gus Malzahn’s team as just three-point favorites as they travel to Columbia, SC to take on the South Carolina Gamecocks.

Will Muschamp’s team got its first victory of the season on Saturday in a 41-7 win at Vanderbilt. Gamecocks running back Kevin Harris was the star for the game, rushing for 171 yards and two touchdowns on 21 carries.

Here are early lines for the other SEC action on Saturday:

South Carolina football coach Will Muschamp announced this week that he won’t be discussing injuries anymore this season with the worry it might allow someone to deduce if certain players had COVID-19.

He also did away with the pregame release of a dress or travel roster. On Saturday, one USC starter was not with the team in warmups for the game against Vanderbilt.

Defensive tackle Keir Thomas was missing during those team warmups at Vanderbilt Stadium. A school spokesman said he didn’t make the trip.

Reserve defensive back Jaylin Dickerson also did not make the trip.

Linebacker Jahmar Brown, who has yet to play this season with a knee injury, was also not out with the linebackers warming up.

(New Hampshire Primary Source is a regular feature of WMUR’s political coverage every Thursday morning, with frequent updates throughout the week. To sign up for WMUR’s weekly New Hampshire Primary Source and political email newsletter, which will be delivered to your inbox on Thursday at 6 a.m., click here.)>> Download the FREE WMUR appSCOTT TO FUNDRAISE IN NH FOR SUNUNU. South Carolina Sen. Tim Scott, who is emerging as a conservative leader nationally, will visit New Hampshire later this month to headline a fundraiser for Gov. Chris Sununu.New Hampshire Primary Source first reported news of Scott’s visit on Twitter earlier Friday. Scott is among a widening groups of Republicans who are in the national conversation as potential presidential candidates in 2024.Scott is scheduled to be in New Hampshire on Thursday, Oct. 22, for an evening reception for Sununu’s campaign committee, with tickets beginning at $1,000 per person. The Sununu campaign … Read More